Sooooo... Does This Mean the CPA Exam is Off? 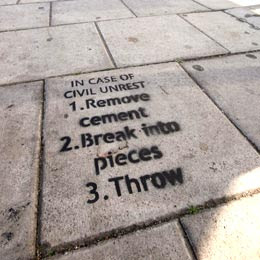 First, I guess we should get the background. The U.S. CPA designation has long been one of prestige and international candidates have been heading here to take their exams for as long as they've been allowed to so they can go home and say on resumes that they have passed the U.S. CPA exams. Last year, the AICPA (American Institute of CPAs, for those of you not hip to accounting's countless acronyms) announced the exam would now be administered in a handful of countries including, oddly, Bahrain. Just recently, they committed to an August launch of international testing, with Bahrain still on the list.

In analyzing locations for international testing, one of the AICPA's largest concerns has always been security. The CPA exam is proprietary to the AICPA and since the exam is meant solely to protect the interests of the profession, it would be a risk to its authority were the exam to be compromised and somehow bootlegged by unsavory international characters out to make a buck (or ruble or yuan).

Wonder if this changes the situation?

The financial district of Manama was deserted, shops and malls were shuttered and Sunni and Shiite vigilantes armed with metal pipes and clubs were in the streets after hundreds of troops rolled into Bahrain from Saudi Arabia.

State television interrupted normal programming to announce the state of emergency in the strategic Gulf state, which is home to the US Fifth Fleet and major international banks and finance institutions.

"Due to the ongoing circumstances in Bahrain ... King Hamad has announced a state of national emergency as of Tuesday for three months," it said.