CPA Exam score  release timetables have been such a hot topic amongst candidates that we  have decided to post regular updates. Updated score release timelines will be announced twice annually on AICPA Insights® and will also be posted  on the CPA Exam website. Since we would rather have candidates study for the CPA  Exam rather than spend time notching off business days on a calendar, we have  contained the score release timeline in a table below for candidates to easily  find their score release dates.

In the first half of 2013, scores for the CPA Exam will be released by the  National Association of State Boards of Accountancy to individual state boards  of accountancy based upon the target score release dates listed in the table  below. 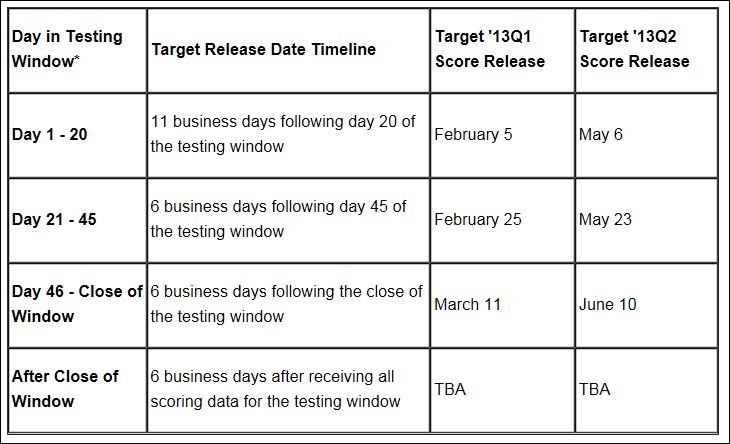 * Records received by AICPA. Note:  ‘Day in Testing Window’ refers to the date AICPA receives the test result, not the test  date. Additionally, some candidates who take the BEC section might receive their  scores approximately one week following the target release date due to  additional analysis that might be required for the written communication tasks.  Scores are generally released during regular business hours.

Wave 1 - score release anticipated for May 6, but the AICPA has been known to release a day or two before the estimate.